Shae Gemmell stated in victory lane that Flamboro Speedway is one of his favorite tracks, and it’s easy to see why. Starting on the front row, he would lead all 100 laps en route to winning the first round of the Grisdale Racing Products Triple Crown on Sunday afternoon.

Chris Howse posted a lap of 15.434 seconds to qualify first for the b-main, ahead of Tom Gibbons, Carson Nagy, Tyler Di Venanzo, Mike Klotz, David Gallinger, Gary Elliott, and Brent Wheller. The b-main would be scheduled for 20 laps, with the top-six transferring to the main event.

Chris Howse grabbed the early lead, with Tom Gibbons and Carson Nagy side-by-side for second ahead of Mike Klotz, Gary Elliott, and Brent Wheller. Nagy would get the spot on Lap 3 ahead of Gibbons, with Wheller getting by Elliott for fifth. Gallinger would follow him through, taking sixth and the final transfer spot on Lap 7. However, that didn’t last long, with Gallinger spinning a lap later in turn four for the first caution.

Chris Howse got a good restart to keep the lead, with Gibbosn moving into second ahead of Nagy, Wheller, Klotz, Tyler Di Venanzo, Elliott, and Gallinger. The race would not stay green for long, though, as Gallinger went for a second spin in turn four on Lap 14.

The restart saw a battle for the lead between Howse and Gibbons, with the pair making contact along the way. Tom Gibbons would come out on top, leading the rest of the way en route to the victory ahead of Chris Howse, Carson Nagy, Mike Klotz, Brent Wheller, and Gary Elliott. Unfortunately, David Gallinger and Tyler Di Venanzo failed to qualify for the main event.

Before the green flag, J.R. Fitzpatrick would be given a die to roll to determine the invert. He’d roll a four, placing Jordan Howse on pole ahead of Shae Gemmell, Ryan Kimball, and himself. The rest of the field would follow suit in how they qualified, and completed the b-main.

Shae Gemmell wasted no time getting to the lead, taking the top spot on the opening lap ahead of Jordan Howse, J.R. Fitzpatrick, and Jake Sheridan with Ryan Kimball in fifth. Meanwhile, Mike Klotz’s race came to an early end, as he headed into the pits on Lap 8.

The first caution of the event would then fall three laps later on Lap 11 for Tim Norris spinning in turn four. This would set-up a restart, which produced another caution with Wickett going around in turn one. The second attempt saw the field check-up going into turn one and two, with the chain reaction resulting in Cadman spinning Albers, collecting Mornaghan and Gibbons in the process.

The third attempt would go cleanly with Gemmell continuing to lead as Sheridan moved into second ahead of Howse, Fitzpatrick and Kamrath. The race appeared to have a single-file appearance to it, with the drivers clicking off laps. However, that ended with Nagy going around off of turn four for the fourth caution at Lap 35.

Gemmell got another good restart keeping the lead ahead of Sheridan, Howse, Pritiko, Fitzpatrick, and Kamrath. The racing upfront wouldn’t be clean, with Howse and Pritiko making contact as they battled for third. Through the contact, though, Howse was able to hold onto the third-place spot. Meanwhile mid-pack, Gilbert began to slow with an issue, but he was able to get off the track into the pits without a caution.

As the battle for third sorted itself out, Fitzpatrick continued to run fifth ahead of Kamrath, Rick Burbridge, Kimball, and Corcoran. The laps continued to click off once again until the fifth caution at Lap 48 for Albers spinning on the front stretch.

Gemmell held serve on the restart, with Sheridan still in second ahead of Howse, Pritiko, and Fitzpatrick. As the top-10 strung out single-file, the same couldn’t be said for the back half as they battled for positions. That did not pan out well for them, with Monaghan spinning Wheller in turn two on Lap 54 for the sixth caution.

Gemmell continued to lead on the restart ahead of Sheridan, with contact once again between Howse and Pritiko. Howse held off the charge from his competitor, as Fitzpatrick ran fifth ahead of Kamrath and Kimball. Kimball would make his way around Kamrath for sixth with 30 laps to go. He then got by Fitzpatrick to break into the top-five at Lap 77 as they weaved their way through lap traffic, though Fitzpatrick battled back to retake the spot a lap later. The seventh caution then flew on Lap 87 for Mark Burbridge spinning on the frontstretch.

Gemmell held serve on the restart ahead of Sheridan, as Pritiko got by Howse to move up into third. However, the battle up front was cut short as the caution came out on Lap 90 for Gibbons sliding up off of turn two, causing Kimball to climb the backstretch wall, before coming down, and catching Nagy to send Nagy back up into the wall.

The four-cylinder drivers put together a pair of exciting features, with birthday Erik Dalla Riva and points leader Karl Sault picking up the checkered flags.

Off the drop of the green flag in the first feature, Erik Dalla Riva grabbed the early advantage ahead of Will Gibbons, Tyler Lewis, Dylan Sharpe, and Michael Hooper.

The top-five remained the same through the first 12 laps, until Hooper’s strong end came to an end as he pulled into the infield with an overheating issue.  This allowed Kyle Istead to join the top-five, until he was passed by Karl Sault on Lap 14. Sault’s climb didn’t stop there, as he’d pass Sharpe for fourth with two laps to go, before passing Lewis a lap later.

Shawn Taylor made the right moves early in the second feature, grabbing the early advantage ahead of Ayrton, as Watson and Young battled side-by-side. Unfortunately, that battle would not end well with contact being made, resulting in both hitting the outside turn three and four wall, collecting Istead, Dalla Riva, and Lewis with them. Watson would display his displeasure with Young on the track, before the discussion continued in the pits. As a result, Watson would be parked and disqualified for “unsportsmanlike conduct.”

At the front, Taylor would hold the lead with Wallace back up to second, as Sharpe and Sault battled for third ahead of Gibbons. Sault got the spot, followed by passing Wallace for second on Lap 8. Unfortunately, Wallace’s strong run came to an early end as she pulled off with an issue with 11 laps to go.

At the front of the field, Sault’s climb took him right to the top, as he got alongside Taylor for the top spot on Lap 11. He would complete the pass a lap later to take the lead, with Sharpe following him through with seven laps to go for second. Taylor now ran third ahead of Gibbons and Istead. Gibbons then followed suit, passing Taylor for third on Lap 15, as Thorne headed pit side with a mechanical issue.

Whether he started on pole or at the back, it did not affect David Rockwood as he won both McClurkin Properties Pure Stock features.

In the first feature, Rockwood grabbed the early lead on the opening lap with Jordan Morris moving into second ahead of Mark Thorne, Leo Labarbera, and Gillian Hils. It didn’t take long for the first caution of the event, coming on Lap 5 as Eric Stewart and Bobby Mercer got together in turn three.

The restart saw a battle for the lead between David Rockwood and Morris, with Labarbera moving into third ahead of Thorne, as Hills continued to run fifth. Rockwood would get by Morris for the top spot on Lap 9, beginning to put a gap on him.

Dale Lucas continued to make his way forward, passing Hills on Lap 13 to move up into the top-five. The race would then be slowed a couple laps later, with the second caution coming out at Lap 15 for Hooper being spun around backwards in turn two, followed by Kyle Lucas spinning once the yellow came out. The chain of events started with Wheller taking the first slide through the corner, as there was fluid laid down in the corner.

David Rockwood would get a good restart, clearing Morris coming to the white flag and leading the rest for the victory. Jordan Morris crossed the finish line in second, but was disqualified on a technical infraction post-race. Mark Thorne finished third, followed by Leo Labarbera and Dale Lucas.

In the second feature, Mark Dennis grabbed the initial lead ahead of Jared Bodner and Brian Rockwood, with Rockwood getting alongside Bodner on Lap 2. Rockwood got the spot two laps later, with Dale Lucas, Jordan Morris and Leo Labarbera following him through.

Lucas continued his climb forward, moving into second with Morris alongside him on Lap 6 ahead of Labarbera, Mark Thorne, and David Rockwood. Morris was able to take advantage, taking the lead two laps later, with Lucas, Dennis, and Labarbera three-wide for second. Lucas came out ahead with Labarbera in toe, as Dennis was stuck three-wide again, this time with Rockwood and Thorne.

Morris’ strong early run came to a hault on Lap 10 as he slowed with a mechanical problem. This allowed Lucas to jump up into the lead ahead of Rockwood, Labarbera and Thorne. Morris was able to get back going, though now back in fifth ahead of Dennis, Bodner and Chris Pendlebury.

At the front of the field, David Rockwood’s climb back through was complete as he’d take the lead on Lap 16. However, he wouldn’t be able to run off into the sunset as planned, as the caution flew a lap later for Morris going for a spin off of turn four.

Video of the second feature --- https://www.youtube.com/watch?v=ZTf9VQoZrWk

Thanks to Derek Smith for all of his photos. Please check out more at http://www.racepulse.com.

After an exciting first round for the Grisdale Triple Crown, the Grisdale Racing Products Late Models are back in action this weekend with the third night of regular season competition. Also, Saturday night marks the second appearance of the season for T.Q. Can-Am Midgets following an exciting pair of features last month. They will be joined by the Canadian Vintage Modifieds, Ray’s Towing & Recovery Super Stocks, and the Pro 4 Modifieds. The pit gate opens at 4 pm, followed by the front gate opening at 5pm with racing starting at 6:30 pm.

Gate details and admission prices, along with the full schedule for Flamboro Speedway this season can be found on the track’s website at http://www.flamborospeedway.ca.

Be sure to keep up with the latest by following the speedway on Twitter at https://twitter.com/FlamboroSpdwy and Instagram at https://www.instagram.com/flamborospeedway 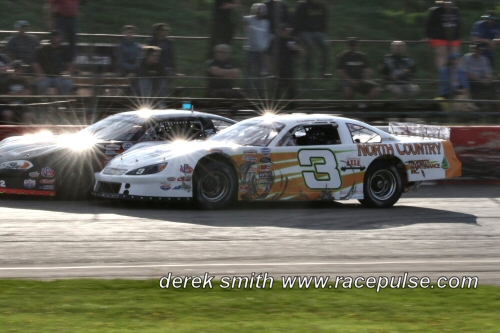 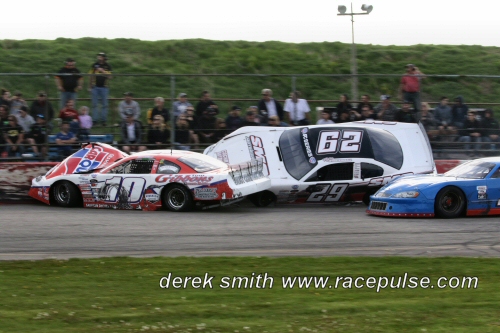 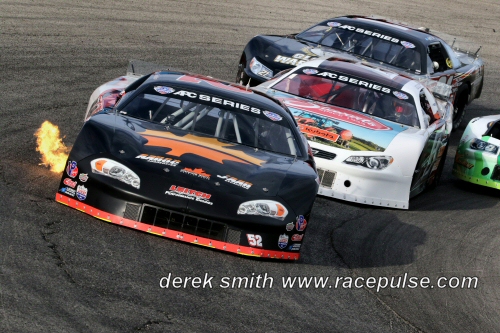 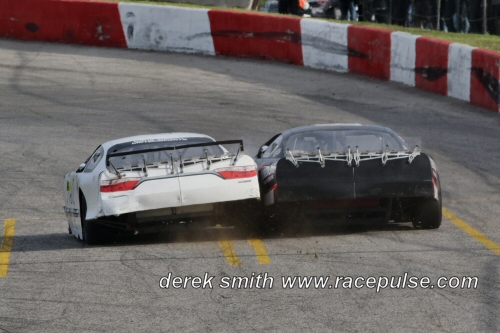 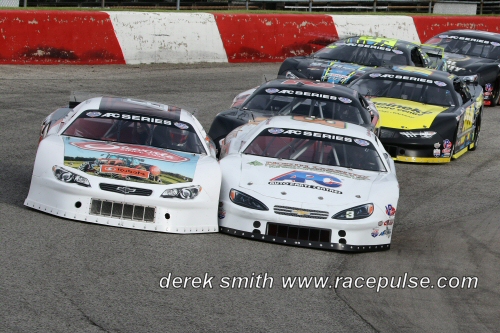 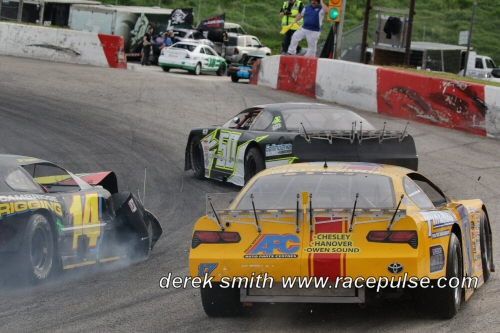 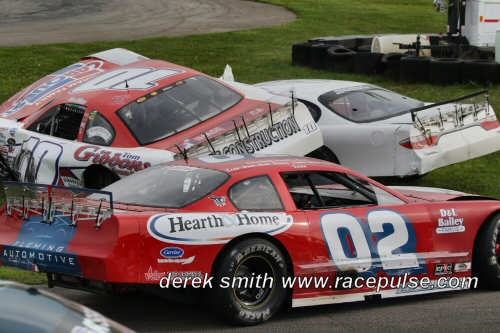 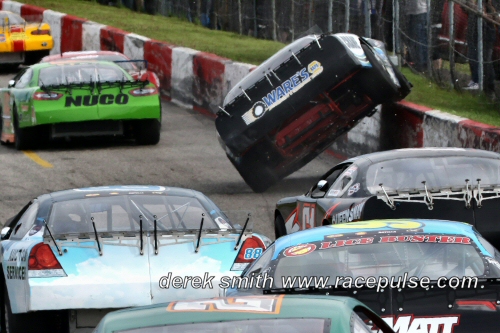 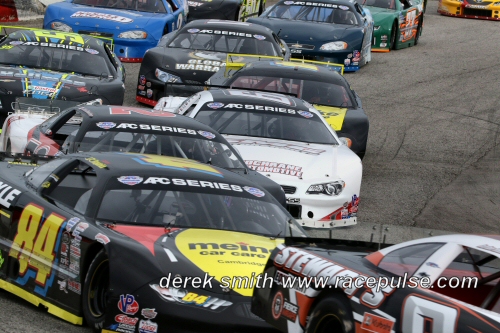 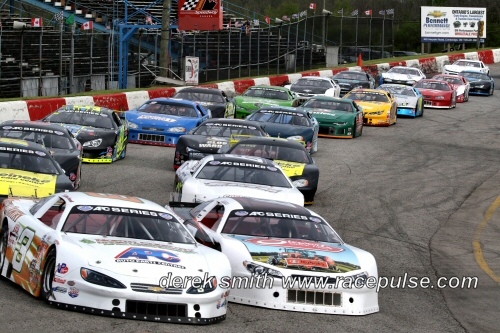 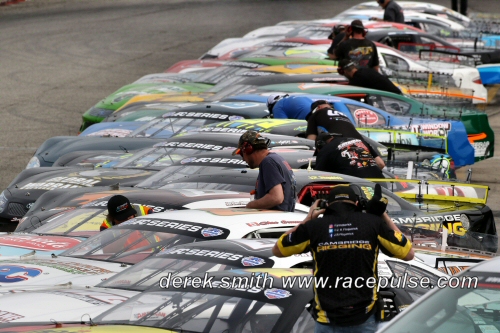 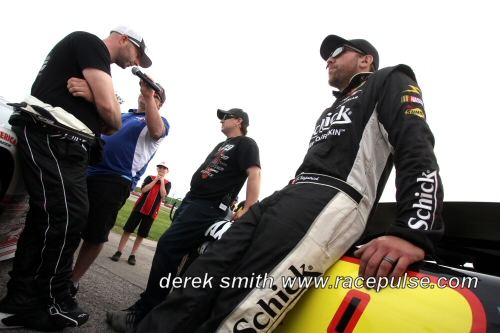 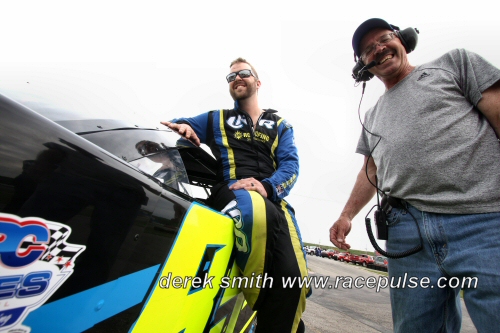 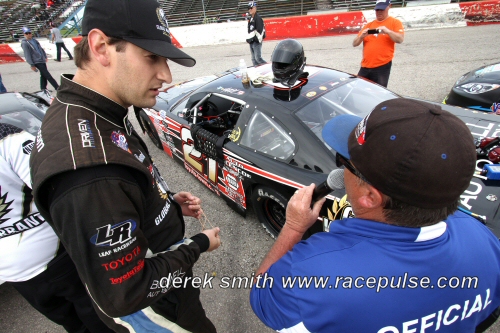 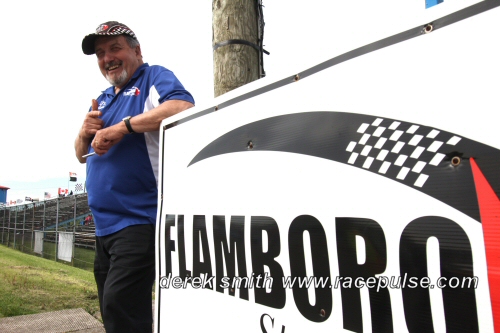 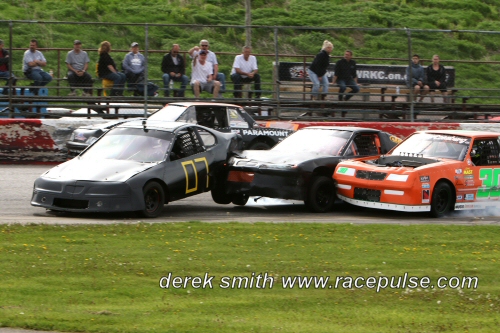 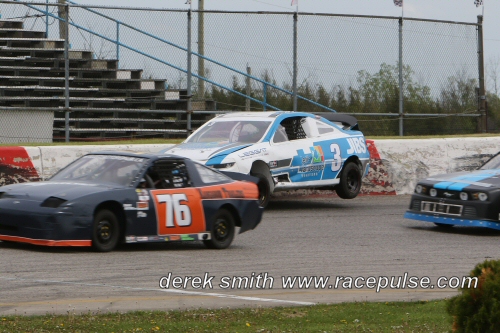 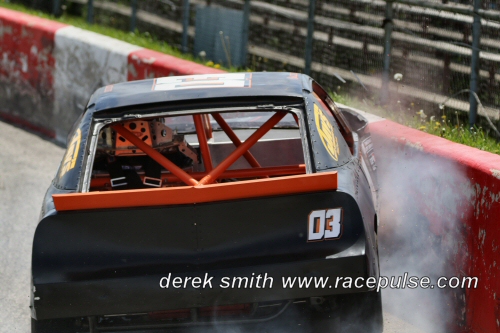 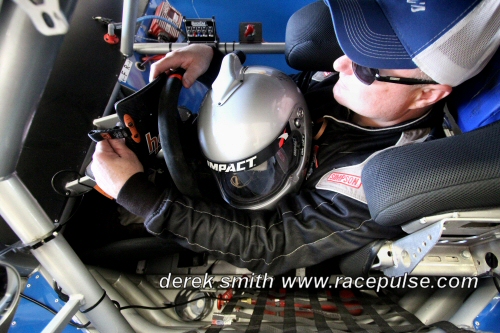 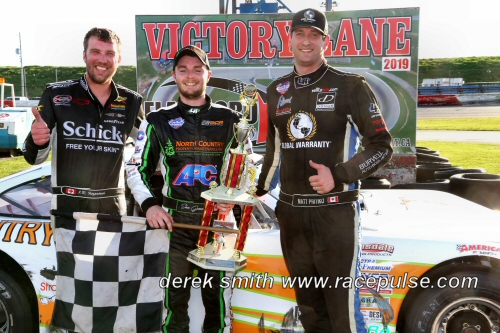 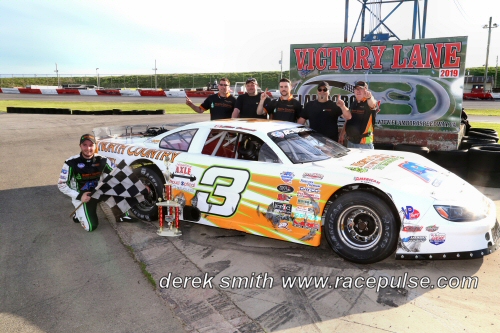 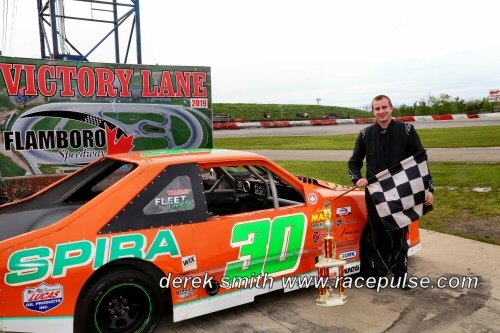 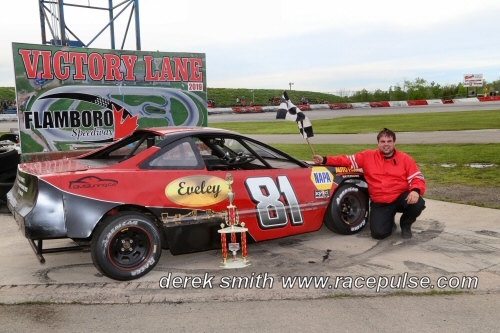 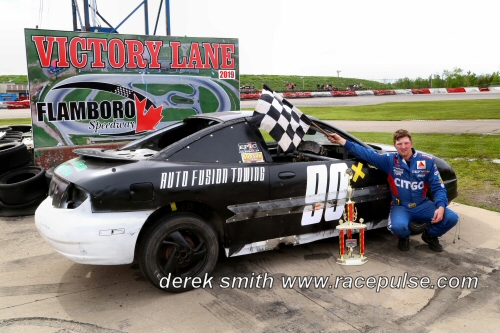